The ANFA CSR Committee was formed in 2018 to work for the betterment of the Nepali society through the medium of football.

The ANFA CSR Committee was formed in 2018 and I was nominated the coordinator of the committee during the formation. With only three months left in calendar for the brand new year, we were a little confused about the scope of work that fell in the committee despite knowing what the committee stood for. There were no records of the work carried out by the previous committee. The newly formed committee just had the vigour to work for the betterment of the Nepali society through the medium of football.

In the first year, the All Nepal Football Association signed a MoU with UNDP in their promotion of the sustainable development goals. Football being the number one sport in the country, both the parties believed that the promotion would rip benefits through the partnership with local clubs.

In the same year, the committee nominated Ms. Khusbu Oli in the individual award category of the AFC Dream Asia Award. Ms. Oli having worked extensively with street children bagged the award in a glittering ceremony held at the AFC Headquarters in Malaysia.

Following the 2015 earthquake, the AFC had rebuilt the Setidevi High School in Shaule, Sindhupalchowk. We gave a presentation at the ceremony on the project.

Programs and Events Conducted by ANFA CSR Committee in 2019

The All Nepal Football Association today distributed daily essentials to twenty-eight foreign football players and coach of the A Division Clubs. The players are currently engaged in different A Division Clubs and played the Martyr's Memorial'A'Division League. The recruits are currently stuck in Kathmandu as the nation fights the novel corona virus panedemic with government imposing locked down since last month. ANFA used its vehicles to visit the players living in different areas of Kathmandu.

All the ANFA afilicated District Football Association's (DFA) have united pledging to help and donate to the needy amid the coronavirus pandemic.

Gorkha Football Association joned hands with Gorkha Municipality to facilitate foods packages to the underprivileged people of the Municipality.

The ANFA earlier also had hanedover its two ambulances to Lalitpur Metropilitancity Office. The ANFA Girls' Academy in Rauahat is being used by the Province No.2 government as quarantine.

The All Nepal Football Association (ANFA) on Tuesday handed over two its ambulances to the Lalitpur Metropolitan City office.

The ambulances shall be used the office as the country fights this pandemic situation. It shall be returned to the All Nepal Football Association once the situation returns to normalcy.

Maharjan thanked ANFA for this humanitarian deed initiated by the ANFA during this time of crisis.

The two ambulances were availed by the ANFA through the FIFA Forward Fund.

Other academy buildings in Kathmandu, Butwal and Dharan can be used for similar purposes if the need arises.

The Province No. 2 government on Friday quarantined 36 persons returning from India at the ANFA Girls' Football Academy located in Rautahat.

The 36 persons returned to Nepal from different parts of India via the Bairgania border in Gaur.

The Chandrapur Municipality has fixed 58 beds at the football academy for quarantine purposes.

The All Nepal Football Association had earlier proposed the government to let its facilities, the four academies in the four provinces, to be used as quarantine as the country fights the pandemic.

All the four academies of the association have been funded by FIFA.

ANFA ready to proivde its facilties for quarantine

ANFA ready to proivde its facilties for quarantine

The All Nepal Football Association (ANFA) has decided to provide its physical structures for temporary quarantine and isolation facilities if necessary.

In an act of corporate social responsibility, the association is ready to provide its ANFA complex hostel in Lalitpur, academy hostel in Butwal and Dharan, and female football academy in Rautahat to the federal, provincial and local governments for the purpose of quarantine and isolation facilities if there is spread of COVID-19 in Nepal.

The ANFA also urges one and all for joint efforts to cope up with this global pandemic. 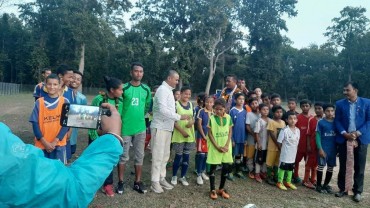 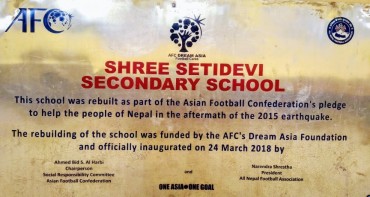 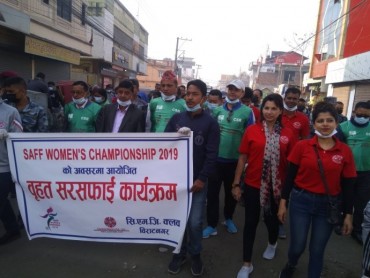 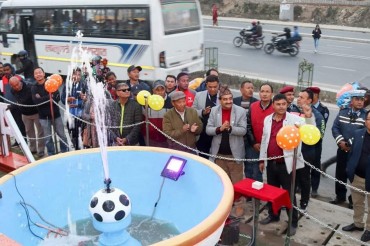 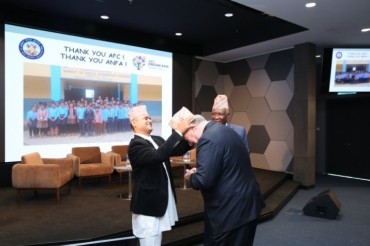 AFC Dream Asia Award 2019 at the AFC Headquarters in KL

No more Albums to load