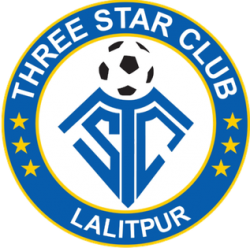 Three Star Club is a Nepali football club based in Patan, Lalitpur. They play in the Nepalese first division, the Martyr's Memorial A-Division League.
Three Star Club is one of the well-established and successful clubs in Nepal. The club had a modest beginning in 2031 B.S. A group of enthusiastic young people of Patan Durbar Square, Mangal Bazar established the club for sports development, social service, personality development and brotherhood. The club has been organizing many activities since then, but it is more recognizable as one of the leading football teams in the country.
Three Star Club’s football journey started from D-Division league. The club managed to reach A-Division league in 2039 B.S. Since then, Three Star Club has produced a steady stream of qualitative performance in national and international tournaments. Four times Nepal's top division league champion, the club has an avid fan following in the country and boasts of many national players. They have their own official fan group named "We Are Stars".