The 19th Congress of All Nepal Football Association has concluded at Heritage Garden in Sanepa on Tuesday.

The Congress has endorsed all the decisions proposed by the 12th Executive Committee meeting.

ANFA Spokesperson Kiran Rai, during a press meet following the conclusion of the Congress, said the Congress has analyzed and accessed the decisions of the past and projected football tournament for the future. 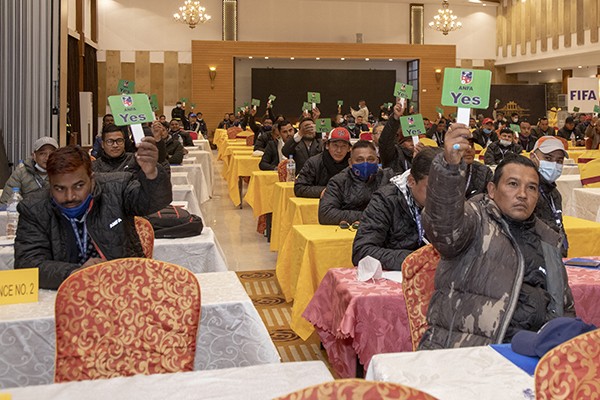 President Sherpa gave a welcome speech to the distinguished guests who graced the event. Sherpa briefed the event about the progressive programmes ANFA has been undertaking. Sherpa said the leadership had focused on strengthening the five pillars― good governance, infrastructure, training, competition, capacity building― of the organization.

Sherpa thanked the guests and other participants for accepting ANFA's invitation to take part in the event.

President of Nepal Sports Journalists Forum (NSJF) Durganath Subedi also gave a welcome speech during the event. He lauded ANFA's efforts of transparency and stressed on the need for investing on grassroot football and women's football. Subedi said the decision of equal pay taken by ANFA should be followed by other organizations too and should not be limited on paper. He wished well for the successful completion of the event.

Former Youth and Sports Minister Purushottam Poudel said football should be a medium for social unity. Former ANFA President Narendra Shrestha also wished for the conclusion of the Congress.

National Sports Council Member Secretary Ramesh Silwal said ANFA had to face various hurdles which have curtailed the expected achievements. He wished ANFA well to clear such hurdles and achieve their aim of making football sustainable.

Speaking in the opening session, Secretary at Ministry of Youth and Sports Ram Prasad Thapaliya congratulated for the Congress.

Minister for Youth and Sports Dawa Tamang said the 19th ANFA Congress should set an example for the development of football in the country. He thanked ANFA for inviting him to the event. The opening session concluded following the minister's speech.