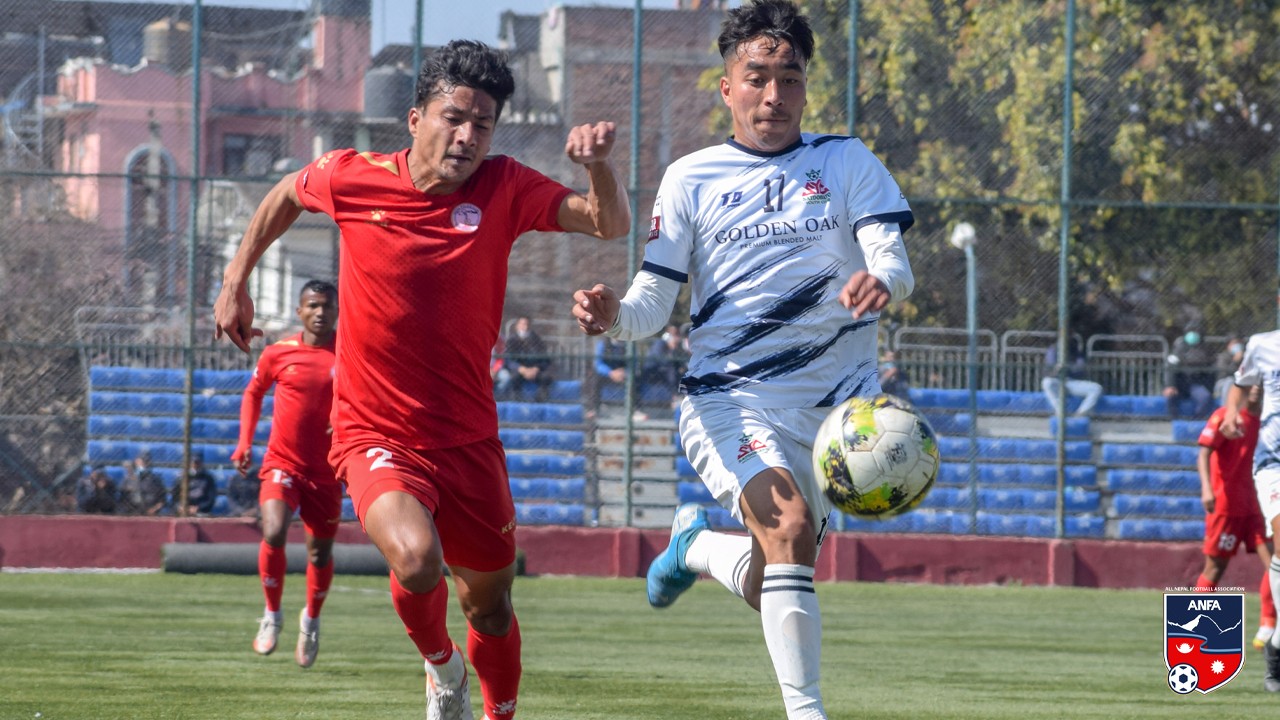 In the other game at ANFA Complex, Satdobato Youth Club (SYC) edged Nepal Police Club (NPC) 1-0 in a highly-contested match.

Second-placed MMC could not cut the deficit to the league leaders after playing a 1-1 draw against rivals TSC.

In the first match at Dasharath Stadium, Bimal Gharti Magar and Sunil Bal scored for the leaders against the bottom-placed CYC. Gharti Magar opened the scoring in the 17th minute which was doubled by Sunil Bal in the 35th. The match was briefly halted in the second half when Manish Dangi suffered a nasty head injury after a collision with another player.

Dangi, who substituted goalscorer Bal in the 61st, collided with Yannick Ketcha and fell on his head to the ground. Match referee Shyam Danuwar immediately halted the match and medics rushed to unconscious Dangi. After briefly administering him, medics took him to Blue Cross Hospital in an ambulance. The hospital later issued a statement saying the player was treated in the emergency ward and is currently out of danger.

In the other match played at ANFA Complex, Akash Buda Magar scored from a penalty in the 19th minute to give SYC a narrow victory over NPC. Buda Magar was brought down inside the box by Hemanta Shrestha prompting referee Nabindra Maharjan to point to the penalty spot.

NPC romped up the pressure in the second half but a resolute defending from SYC coupled with some fine saves by their goalkeeper Abhishek Baral gave them the victory.

The victory took SYC to fifth on the table with 15 points from 10 games. NPC remain in the 10th place with 10 points.

The third match between arch rivals MMC and TSC ended in an entertaining draw. MMC, needing a win to keep pressure on leaders MFC, took the lead through Dayananda Elangbam in the 62nd minute. But TSC levelled through Ritik Kumar Khadka in the 71st minute.

The draw meant MMC now have 20 points from 10 games and need something very special to overtake leaders MFC, who have dropped just two points so far maintaining six points lead at the top, with just nine points available. TSC are fourth with 17 points, one point behind Tribhvuan Army Football Club and two ahead of SYC.

New Road Team (NRT) will play Himalayan Sherpa Club (HSC) in the first match at Dasharath Stadium on Sunday at 1 pm. The second match between APF Football Club and Sankata Club will be played at 4:45 pm.