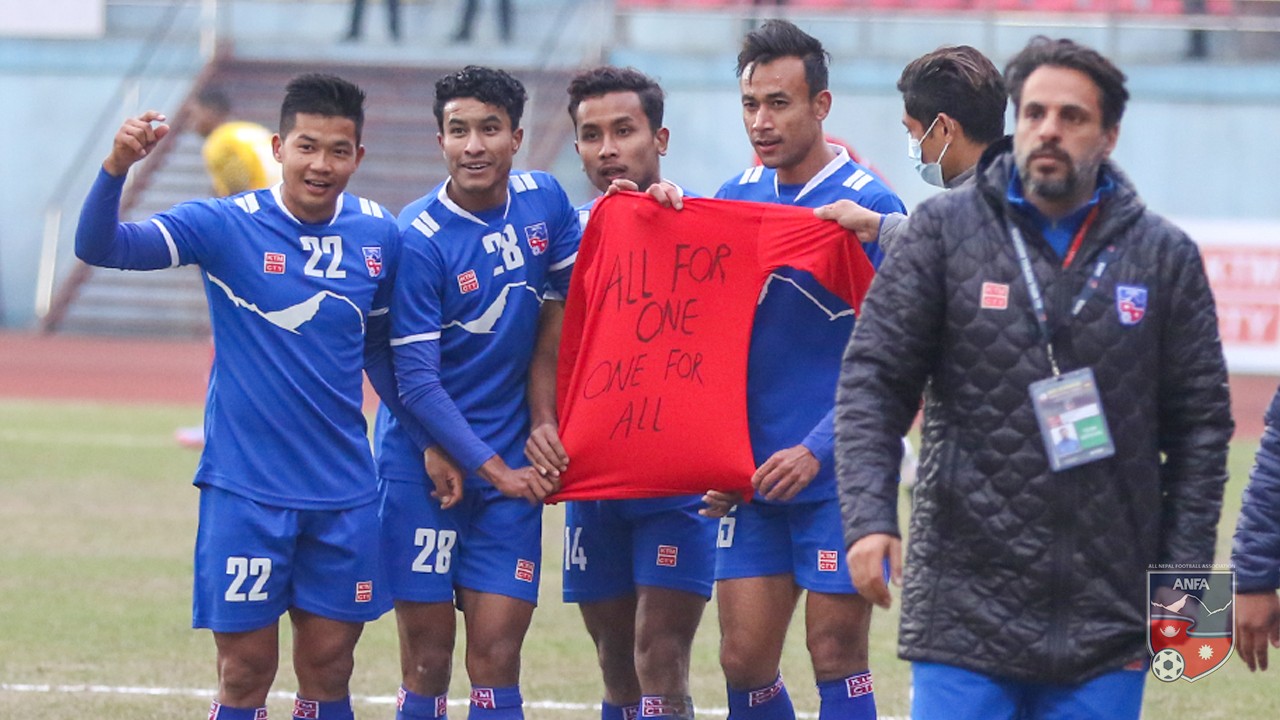 Sujal Shrestha scored the only goal as Nepal defeated Mauritius 1-0 in the second international friendly played at Dasharath Stadium on Tuesday.

Shrestha scored in the 10th minute of the match when Aashish Lama's shot was flicked into his path by Pujan Uperkoti.

Mauritius could have got back into the match through a penalty in the 12th minute when Dinesh Rajbanshi fouled Andy Sophie inside the 18 yard box. But the resulting penalty by Sophie was saved well by Kiran Chemjong to the cheer of a raucous crowd.

It was an eventful match with Nepal finishing the match with 10 players and Mauritius nine.

The match became tense when Adrian Botlar fouled Anjan Bista in the middle of the pitch. After Botlar got involved with Pujan Uperkoti, both of whom were cautioned earlier, referee Nabindra Maharjan showed another yellow to both the players giving them the marching orders in the 80th minute. Nepal's goalkeeping coach Bikas Malla, who ran onto the pitch to separate the players, was also shown red by the referee.

After a goal down and a player down, Mauritius found themselves into more trouble after substitute Emmanuel Foolchund, already on a yellow, was shown another one for a foul against Gautam Shrestha in the 84th minute.

The match was also halted for nearly eight minutes after the floodlights dimmed.

Player-of-the-Match Chemjong made crucial saves to maintain the team's lead and claim the victory for Nepal. Nepal had defeated Mauritius by the same scoreline in the first friendly played on January 29th.

Mauritius head coach Tony Francois said his side played relatively better game than the last one but still could not convert their chances. When asked about the red cards, Francois said his players will learn from the event. "I don't want to talk about referees. I take responsibility for the cards to my players. I hope they realize in the next match," said Francois.

Coach Francois said his team was afraid to play the first friendly but put on a better performance in today's match. "Some of my key players missed the match due to Covid. We played good football but we missed chances to score," he said.

Nepal's head coach Abdullah Almutairi said he was happy with the win. "We tried to play with 3-4-3 formation and we did good. I am happy with my players who played well with physical superior opponents.

Almutairi brushed aside questions about the friendly being too physical and said both the sides were responsible for the tension during the match. "We were 50 percent guilty, they were 50 percent guilty but at the end of the match, players of both the sides went to the fans to applaud them. That is what matters most," said Almutairi. He thought the red card against goalkeeping coach Malla was a bit harsh and only a caution would have been better.